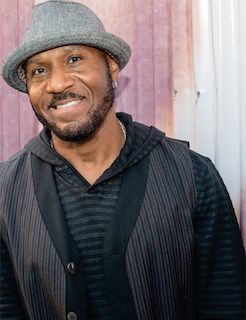 Mike Henry covers an impressive range of acts flawlessly with style and charisma. His attention to character detail and amazing vocal melodies bring audiences to their feet at every performance. These pages offer a small sample of what this amazing performer brings to each and every show.

Mike Henry was born in Shreveport, Louisiana. He developed his strong, soulful voice performing with the vocal group, the Gospel Ambassadors. He moved to Las Vegas in the 80's and performed in hotel clubs and toured to Atlantic City, Reno and Lake Tahoe. Then he moved to San Fransisco's bay area and worked in R&B and Funk clubs.

In 1989, Mike moved to Vancouver to join the band Stripes and toured Western Canada and the Pacific Northwest. He then toured as a solo singer to Asia, Europe and the Middle East.  He met Dan Casavant in Vancouver and formed the Big Dawg Band in 1997.  He has made a name for himself in Vancouver as a dynamic and soulful singer. The influences of Sam Cook, Marvin Gaye, Ray Charles, and many others live in the heart and voice of Mike Henry